The Lewis Hahn Memorial Lecture is a periodic summertime lecture sponsored by the FPC. It was begun in 2012, in honor of Lewis Edwin Hahn, 1908-2004. Lewis Hahn was raised in west Texas, took his Ph.D. at the University of California, Berkeley, in 1939, under the direction of Stephen Pepper. He had a full and successful career in the Philosophy Department of Washington University in St. Louis, being recruited to Southern Illinois University Carbondale in 1973. He was author of several books and many articles and was especially distinguished by his efforts in comparative philosophy and inter-cultural philosophical and religious dialogue. From 1981 until 2001 he edited the prestigious Library of Living Philosophers. He served the Societies and the Foundation for the Philosophy of Creativity, in several offices and principally as its Secretary/Treasurer, from its founding in 1957 until his retirement from active service in the profession in 2001. 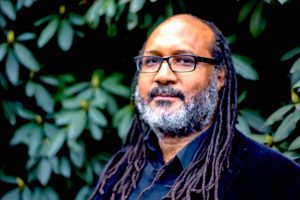 Lewis R. Gordon is an Afro-Jewish philosopher, political thinker, educator, and musician (drums, other percussive instruments, and piano) who holds a Ph.D. in philosophy from Yale university. Gordon’s research in philosophy is in Africana philosophy, philosophy of existence, phenomenology, social and political philosophy, philosophy of culture, race, and racism, aesthetics, philosophy of education, philosophy of science, philosophy of psychiatry, and philosophy of medicine, psychiatry, and  psychoanalysis. As a public intellectual, Gordon has written for a variety of political forums, newspapers, and magazines, and has lectured and organized workshops and political meetings across the globe. He is Professor and Head of the Philosophy Department at UCONN-Storrs, where he also has affiliations in Judaic Studies, Caribbean and Latinx Studies, Asian and Asian American Studies, Women’s, Gender, and Sexuality Studies, and Global Studies. His visiting appointments include Philosophy and Government at the University of the West Indies at Mona, Jamaica, and Honorary Professor in (UHURU) the Unit for the Humanities at the university currently known as Rhodes in South Africa, where he was formerly the Nelson Mandela Distinguished Visiting Chair in Political and International Studies (2014, 2015). His previous appointments include the 2018–2019 Boaventura de Sousa Santos Chair in the Faculty for Economics at the University of Coimbra, Portugal; the European Union Chair in Euro-Philosophy at the Université Toulouse Jean Jaurès, France (2014–2019); Writer-in-Residence at the Birkbeck School of Law at the University of London (2016), the Laura H. Carnell Professor of Philosophy at Temple University (2004–2013); Professor of Africana Studies, Contemporary Religious Thought, and Modern Culture and Media at Brown University (1996–2004); Visiting Professor of African and African American Studies at Yale University (1999), and Philosophy and African American Studies at Purdue University (1993–1996). His major works include Bad Faith and Antiblack Racism (Humanities Press, 1995), which will appear in a revised 25th anniversary edition with a foreword by Mabogo More in the Rowman & Littlefield International catalog in 2020; Fanon and the Crisis of European Man, which will appear in a 25th anniversary edition with commentary by an international group of scholars under Routledge in 2020; Her Majesty’s Other Children (Rowman & Littlefield, 1997), which won the Gustavus Meyer Award for Outstanding work on Human Rights; Existentia Africana (Routledge, 2000); Disciplinary Decadence (Routledge, 2006); An Introduction to Africana Philosophy (Cambridge UP, 2008); What Fanon Said (Fordham UP, 2015); Freedom, Justice, and Decolonization (Routledge, 2020); and, with Jane Anna Gordon, A Companion to African-American Studies (Blackwell, 2006); Not Only the Master’s Tools (Routledge, 2006); Of Divine Warning (Routledge, 2009); and, with Fernanda Bragato Frizzo, Geopolitics and Decolonization (Rowman & Littlefield International, 2017); His forthcoming books are 论哲学、去殖民化与种族 (“On Philosophy, Decolonization, and Race”), trans. Li Beilei (Wuhan, China: Wuhan University Press), and Fear of Black Consciousness (Farrar, Straus and Giroux in the US and Penguin in the UK). He co-edits, with Jane Anna Gordon, the book series Global Critical Caribbean Thought and the journal Philosophy and Global Affairs. He is Honorary President of the Global Center for Advanced Studies and a former president of the Caribbean Philosophical Association, for which he now serves as its chairperson of awards and global collaborations. 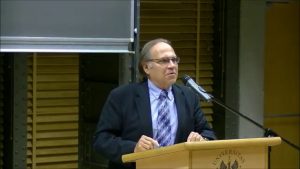 Kenneth W. Stikkers presents the fifth Lewis Hahn Memorial Lecture, “Re-thinking Economics as Moral Philosophy,” at AIPCT in Murphysboro on July 27, 2019, at 7:00 PM. . The lecture is sponsored by the Foundation for the Philosophy of Creativity and its affiliated Societies for the Philosophy of Creativity. Dr. Stikkers is Professor and Chair of Philosophy at Southern Illinois University Carbondale. He is author of many articles in the philosophy of economics, and he is co-editor of Philosophy in a Time of Economic Crisis (Routledge, 2017). In keeping with our new format, two younger scholars will speak on the work of Dr. Stikkers earlier in the day. At 6:00 there will be pizza for those who attend the afternoon sessions and will remain for the main lecture at 7:00. The lecture can be viewed here. The lecture by Zach Thanasilangkul, “Toward Ethical Economies, or How to Move on after Killing Your Mother,” can be viewed here. The lecture by Michael Schleeter, “On the Good(s) of Economics: Reflections on the Social Economics of Ken Stikkers,” can be viewed here.

July 21, 2018, 7:00 PM Free and Open to the Public, at the American Institute of Philosophical and Cultural Thought, Murphysboro, Illinois. Sponsored by: Foundation for the Philosophy of Creativity and the Societies for the Philosophy of Creativity. The lecture can be viewed here. The accompanying lecture by Steven Miller of Ripon College, “Dylan, Anderson, and Ol’ Moose” is here; and the accompanying lecture by John Kaag, “Cabin Philosophy,” is here.

July 21, 2017, 7:00 PM Free and Open to the Public, at the American Institute of Philosophical and Cultural Thought, Murphysboro, Illinois. Sponsored by: Foundation for the Philosophy of Creativity and its Societiesn and AIPCT. The lecture can be viewed here.

Robert Cummings Neville, Professor of Theology and Philosophy, and Director of the Albert and Jessie Danielsen Institute, Boston University

“Creativity of Nobel Laureates in Science and Pulitzer Prize Winners: An Empirical Study of Janusian, Homospatial, and Sep-Con Articulation Processes”